Safety Third is the ninth level of Chapter 1. It is the introduction to dissolving blocks that disappear seconds after you touch them. Dissolving blocks appear in every chapter except for Chapter 6, used often. This level has a bandage, which is next to/under one of the top saws.

Wall-jump up the dissolving blocks (make sure you do not fall as you might not be able to get back up). The bandage can be easily obtained by a character that can double jump (Ogmo, The Kid, or Flywrench), but you will probably not have those characters unlocked yet.

Alternatively you can use Headcrab/Gish (unlocked with 10 Bandages) and jump onto the wall (you will stick to it) left of the bandage and keep pressing right. After the blocks dissolve you will fly right into the bandage.

It is more difficult with Meat Boy or any other character as you will need to wall-jump off of one of the left dissolving blocks to get the bandage. 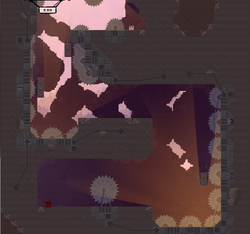 So Close is the dark world version of Safety Third. The color is changed to purple and most of the dissolving blocks are removed, only keeping the ones necessary to get up. There is also a saw at the start and some saws at the top next to Bandage Girl.

Retrieved from "https://supermeatboy.fandom.com/wiki/1-9_Safety_Third?oldid=13454"
Community content is available under CC-BY-SA unless otherwise noted.