The Bit is the eighth level of Chapter 1. It is similar to the third level The Gap, but the bottom is covered in saws and there is a block in the middle. It is a very straightforward level.

Jump over to the middle platform and wall-jump to the top of it, then jump over to Bandage Girl.There are also 2 more strategies to beating this level. 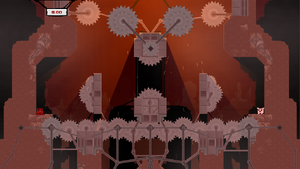 Big Red is the dark world version of The Bit. It has mist coming goes from right to left and has a red tint as opposed to the yellow tint of its light world counterpart. It is very different; two platforms on each side are added, one side of each covered in saws; the middle platform has been cut in half, making you go through the middle between saws; and the bottom saws that were transparent are now deadly.

You can get an even faster time using Naija on this level, by using her shift power when nearing the middle gap after jumping off the far left wall.

Retrieved from "https://supermeatboy.fandom.com/wiki/1-8_The_Bit?oldid=13453"
Community content is available under CC-BY-SA unless otherwise noted.