Diverge is the seventh level of The Forest. This level features 2 paths, 1 path on top which is faster (bandage near the saw), and 1 path going normally.

There are two ways. The top one is recommended, as it is faster and easier. It is also required to get the A+ ranking. For the top one: jump to the wall in front of you at the beginning of the level, and wall-jump up to the corner saw. Carefully make a wall-jump, holding the right movement button. The bandage located right above the corner saw should be collected after executing this move. After that, simply jump to Bandage Girl. An alternate way to get the bandage is by just walking off the top area over the saw. The bottom road just requires some wall-jumping around saws. 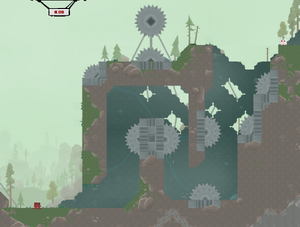 Two Roads is the dark world counterpart to Diverge. It is the same but with more saws, making both paths harder. There is also a mist that goes from right to left that gives the level a green tint.

Top road: jumping over the corner saw is the same as the light world, but then you have to jump through a gap in between saws. To do this, just tap the jump key (hold it for a very short time) instead of holding it down. Then just jump to Bandage Girl. Like before, getting the A+ requires going through the top route.

Bottom road: wall-jump around the first saw as before, but then slide down the right wall. Jump over the next saw, slide as far as you can up the next wall, then just keep wall-jumping holding right until you get to Bandage Girl.

Retrieved from "https://supermeatboy.fandom.com/wiki/1-7_Diverge?oldid=13451"
Community content is available under CC-BY-SA unless otherwise noted.