Upward is the second level of the first chapter of Super Meat Boy. It serves to introduce wall-jumping to the player.

Wall-jump up the walls to the right to reach Bandage Girl.

Alternatively, when you start the level, wall-jump off the short wall to the left, then wall-jump up the left side of the middle platform to reach Bandage Girl.

The fastest possible way to complete the stage is to wall-jump off of the very small ledge to the left of your spawn to the wall under Bandage Girl, then proceed to do two wall-jumps up said wall, with the last one right at the edge of the small cliff. Make sure that your last wall-jump is small. Assuming you do all of this optimally, it should take 2.30-2.40 seconds, which is about a half second faster than doing three alternating wall-jumps off to the right, which is the second most optimum way to do the stage. 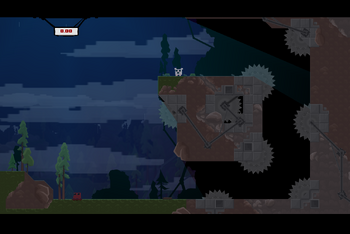 Onward is Upward's dark world counterpart. It is the same, but with sawblades on the walls and ground to make the wall-jumping harder. It also has a dark blue sky with very fast moving clouds.

There are two basic strategies that can be used for this level, either jumping off of the higher land to the left of the beginning and wall jumping up to Bandage Girl, or wall jumping up the right side wall, while avoiding the saws.

The ledge to the left was made smaller, but it is still possible to do the same trick you did for the Light World, albeit much more precise. The saw under Bandage Girl also makes it so that you have to swing slightly further out than you would for the light world. Assuming you do it optimally, it should take about 2.70 seconds as opposed to intentional strategy, which would take about 3.10 seconds.

The name of the level and it's dark world counterpart are part of the phrase "Upward and Onward." This is somewhat ironic, as the phrase is generally used to refer to moving on from a bad experience, though this is only the second level in the game.

Retrieved from "https://supermeatboy.fandom.com/wiki/1-2_Upward?oldid=13457"
Community content is available under CC-BY-SA unless otherwise noted.