Hello World is the first level of the first chapter of Super Meat Boy. As the first level, the only way to die is to jump off the screen so death can only occur on purpose. This level serves to introduce basic controls to the player.

Walk over to the higher area and jump to Bandage Girl's platform, or, alternatively, wall jump off the left wall to the platform. Assuming you it optimally, wall-jumping off the left wall saves about half a second from wall-jumping off of the small ledge to the right and a full second off from going on top of the ledge and jumping to Bandage Girl from there. The level should take about 1.15 seconds to beat if you are speedrunning. 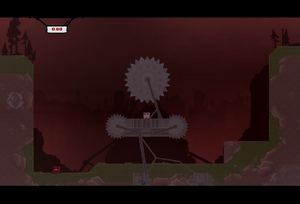 Oh, Hello is the dark world counterpart of Hello World. It is unlocked by getting an A+ on the light world, like other dark world levels.  It adds sawblades on the sides and over the center platform, making it harder to jump to Bandage Girl. It also has a dark red background.

This map is relatively simple, though it can prove to be a challenge for beginning players. Two general choices are available to the player, the left or the right. To the left the player is able to wall jump onto the platform, or take a leap from the top of the cliff if they maneuver themselves well enough while in the air to avoid the saws. To the right, the player can choose to do a running jump onto the platform, wall jump off the wall, or leap from the top of the cliff. The methods for speedrunning this level are exactly the same as above. It should also take about 1.15 seconds.

Howdy is the first level in the Expert Remix and is significantly harder then the previous two 2 levels it's based off of, but is still rather easy and is around the difficulty of a "Hell Level" than anything else. Four more saw blades are added and now wall jumping is required this time. The saw blades speed are swinging much faster then before. The color pallet changes again to a blue feeling.

Like it's counterpart levels this level is rather easy, though it can be challenging for those who have not been to hell, yet. The player need's too wall jump off the left wall onto the metal platform in the metal which is present in the dark world and is also surrounded by saw blades then needs to jump onto the metal plate on the upper left corner while avoiding the quick spinning saw. Then the player needs to jump on the right platform located in the upper right corner in a similar fashion then simply run into Bandage girl.

Retrieved from "https://supermeatboy.fandom.com/wiki/1-1_Hello_World?oldid=13456"
Community content is available under CC-BY-SA unless otherwise noted.