Sidewinder is the sixteenth level of The Forest. It requires you to vertically ascend and descend three shafts while dodging projectiles shot by saw shooters. It is not a difficult level as there are small alcoves that you can use to hide from the saws. 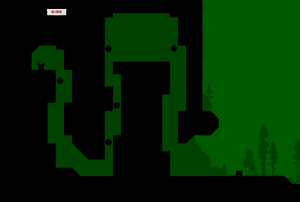 Night Game is the dark world version of Sidewinder. It is blacked out with a green background and Meat Boy and Bandage Girl's positions are switched, so you have to go through the level backwards. The middle shaft is also edited to be thinner and has three saw shooters.

Avoiding the saws, make your way up the first shaft. For the second shaft, go down and stand on the first ledge after the top saw shooter fires, and when the second saw shooter fires, run down the rest of the shaft. For the third shaft, jump to the wall from right next to it, and slide up to the ledge. Slide up the left wall halfway and wall-jump to the right to slide up. Repeat for the last wall.

Retrieved from "https://supermeatboy.fandom.com/wiki/1-16_Sidewinder?oldid=13470"
Community content is available under CC-BY-SA unless otherwise noted.