Cactus Jumper is the fifteenth level of The Forest. It is the first level to introduce saw blade shooters, using them in a easy challenge of just jumping over them. 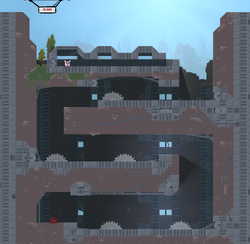 Kick Machine is the dark world version of Cactus Jumper. It has moving saw blades on each floor, and Bandage Girl is in a metal tunnel at the top with a saw shooter in it. There is a bandage located behind Bandage Girl right in front of the tunnel saw shooter.

Jump to the gap in between the two saws, and jump to the wall and to the safe spot. (You can skip the safe spot for a better time) Jump to the saw gap again and wall-jump up the second shaft. Wait for the saw shooters to shoot and right after the shots go past you, jump over the moving saw and wall-jump up the last shaft. Enter the tunnel and stand under one of the cut-outs. When the saw shooter shoots, jump into the cut-out over the saw. Then run to Bandage Girl. (You can skip one of the cut-outs)

Retrieved from "https://supermeatboy.fandom.com/wiki/1-15_Cactus_Jumper?oldid=13469"
Community content is available under CC-BY-SA unless otherwise noted.