Blood Mountain is the 14th Level of Chapter 1. It is the second level to have moving saw blades, this time having them on walls you have to jump up. 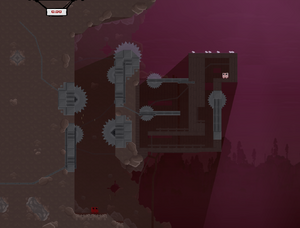 Mystery Spot is the dark world version of Blood Mountain. It adds two large blades in the channel up and enlarges the building, adding more moving saws inside it. A bandage is located floting by the far outside edge of the building below the moving saw.

Wait until the left moving saw is starting to move down, and slide up the left wall and wall-jump around it. There should be a gap on the right wall, wall-jump to it and quickly wall-jump back to the left wall, above the big saw. Wall-jump over the saw at the top of the wall and swing around to the side of the wall, slide down into the building and tap the jump key to wall-jump in between the moving saws. When the last saw is at its top point, jump to the hole in the wall and when the saw reaches the bottom, jump over it and to Bandage Girl.

To get the bandage, stand on the top of the building, swing out and down to the wall when the saw is at the top, grab the bandage and wall-jump around the saw, and wall-jump while holding the right movement key and quickly switching to the left movement key to get back onto the top wall. Then beat the rest of the level.

You can also use Jill to get the bandage and use her power to float back to the starting position, and then beat the whole level.

Retrieved from "https://supermeatboy.fandom.com/wiki/1-14_Blood_Mountain?oldid=13468"
Community content is available under CC-BY-SA unless otherwise noted.