Tommy's Cabin is the 13th level of The Forest. The design of this level resembles a cabin, with Bandage Girl waiting in a small space at the top of it. This is the first level to contain moving saw blades, the same as stationary ones but moving up to down or left to right.

At the start of the level it's either fast to wall jump on the left that to sprint jump on the right side (Vorpal). Then, Jump up through the hole and then jump over the moving saw. Wait for the second moving saw to either be at its highest point before running under or its lowest point before jumping over it.

To obtain the bandage, stand on the little platform over the first moving saw, and when the saw first starts moving right, quickly swing down to grab the bandage and jump over the saw or back up to the platform. 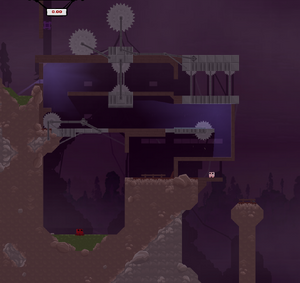 Tommy's Condo is the dark world version of Tommy's Cabin. It changes to purple and extends the cabin, adding many more moving saws. This level contains a warp zone on the roof, leading to Space Boy.

Go through the hole as before and wall-jump off the far right wall to get over the first moving saw. Jump over the second saw the same as the light world. The next two saws will part in the middle, allowing a gap to jump through. Run under the final three saws and off the edge when they are up, land on the dirt pillar next to Bandage Girl and jump over to her.

To reach the warp zone: when you run under the three saws, swing out onto the wall of the cabin, and wall-jump up to the top of it (or jump when you get to the edge and swing out to the top, but that is harder); go over to the two saws on the roof and jump through them to the warp zone.

Note: The warp zone disappears around 17.00 in so you can't be too slow.

Retrieved from "https://supermeatboy.fandom.com/wiki/1-13_Tommy%27s_Cabin?oldid=13467"
Community content is available under CC-BY-SA unless otherwise noted.