Revolve is the twelfth level of Chapter 1. It requires the player to wall-jump underneath the platform that carries Bandage Girl and then wall-jump up to her. A warp zone is located behind her and is very easy to reach, leading to the level The Commander!.

The best way to set up the skip for this level as Meat Boy is by holding right as the stage starts. As soon as you make contact with the wall, you need to wall-jump off it immediately and continue holding right as you did before. Right at the height of your jump, when you are right next to the saw, you need to start holding left, and hopefully you should make contact with the wall to the right of the saw. Finally, wall-jump off of that wall and into Bandage Girl. It will shave 2 seconds off from doing it the normal way. Of course, if you have a character that can double jump, going through the gap would be much easier too. 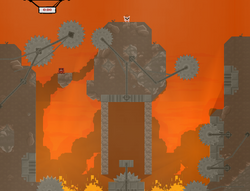 Fireal is the dark world version of Revolve. The background is orange and the middle is enclosed is dissolving blocks. There are also many more saws added and the lower platform is shrunk.

Slide down the wall and jump to the first column of dissolving blocks, slide down to break it and jump through to land on the middle platform. Jump and break a few of the middle blocks of the second column and jump back to the platform; jump through the hole and swing around to the right side of the lower column piece and wall-jump up to the top, wall-jump over to the far right wall and then just jump to Bandage Girl.

Attempting to do go through the saws at the beginning is impossible to do with most characters including Meat Boy, but two characters that can skip the level are The Guy, who can jump through the gap on the left with ease, and Ogmo, who can go on the very edge of ledge below the saw and double jump straight up. While it looks like Ogmo is going in the saw, he has a much smaller hitbox than other characters, which is what allows him to go through the gap in the first place. Both methods take about 2 seconds each as opposed to the normal route which takes 5 seconds.

Retrieved from "https://supermeatboy.fandom.com/wiki/1-12_Revolve?oldid=13466"
Community content is available under CC-BY-SA unless otherwise noted.