Fired is the eleventh level of the Chapter 1. It requires players to wall-jump off of dissolving blocks or else they will fall into the fire. It is a very easy level for anyone who is competent at wall-jumping. It is the first level to feature fire.

The intended way to do the stage is to wall-jump up the dissolving blocks to reach Bandage Girl. You could also wall-jump off of the flat part of wall to the left of your spawn to get behind the 3rd wall and precisely wall-jump through the small between the breakable wall and the ground, though it is about as fast as doing it the conventional way, assuming you do both optimally. You may also wall-jump from the uppermost block of the fourth wall up to the side of the platform The bandage on the stage is located to the right of the upper right column of blocks. Using characters that can hover/jump in the air would make getting this bandage easier. Just swing out from the top of the column to get the bandage and then swing back to land on the lower column. 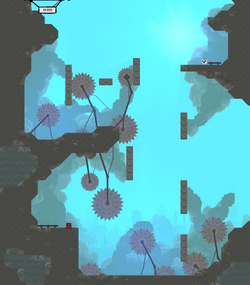 Doused is the dark world version of Fired. It changes the background to blue and removes the fire, adding a lot of saw blades and changing the crumbling block platforms a bit.

Fall down to the ground, jump through the saws and wall-jump up the crumbling blocks, while on the top right column, sprint and jump to the highest left column, and wall-jump to Bandage Girl.

Retrieved from "https://supermeatboy.fandom.com/wiki/1-11_Fired?oldid=13461"
Community content is available under CC-BY-SA unless otherwise noted.